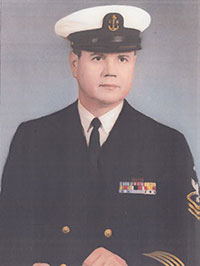 Adam Tigelman was born in Akron, Ohio on September 3, 1925. Like many young men in those times, he left school at the age of 17 to join the U.S. Navy at the start of World War II. He proudly served in various theaters throughout the war, eventually retiring from the Navy in 1967 as a Chief Petty Officer.

He then went to work as a civilian at the Great Lakes Naval Station near Chicago. He led a quiet life, enjoying golf and traveling. Adam never made a lot of money but he was frugal with what he had and he invested wisely.

Adam was diagnosed with prostate cancer later in his life. His research on the disease led him to the Urology Care Foundation's resources, where he learned more about the disease and its treatment. Adam underwent successful surgery without residual effects.

Adam's belief in the Foundation's mission to advance urologic research and education to improve patients' lives was such that he created a trust to benefit the Foundation. We are grateful for his gift and honored that he included us in his estate plan.

Adam Tigelman passed away on August 27, 2014 and is buried at Arlington National Cemetery.

If you would like information about ways you can include the Foundation in your estate plans, please visit our Make a Difference webpage.