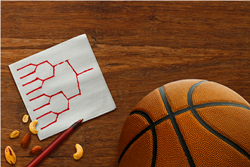 It's no secret that this country loves March Madness, but is it true vasectomy appointments spike during this time of year? Do so many men opt for the procedure during March that urologists are flooded with requests? Do men want a reason to stay at home and watch these games that bad?

"Difficult to completely say if it's a myth or not, but vasectomy appointments don't go up during March Madness at my practice," said Dr. Ajay Nangia. "I've been doing vasectomies for 16 years and it's not like I'm suddenly getting inundated for requests on the Friday of March Madness."

Dr. Nangia, who volunteers for the Urology Care Foundation, is an Associate Professor of Urology at the University of Kansas Medical Center. For the record, Kansas is home to some of the most loyal college basketball fans in America. The Kansas Jayhawks were a No. 1 seed in the 2016 tournament and they won it all in 2008.

Other popular sporting events rumored to cause a rise in vasectomy requests include the Olympics, World Cup and Masters (golf tournament). None of this has ever been proven in a study, according to Dr. Nangia.

"I don't think anyone's ever published a study on it," Dr. Nangia said. "If there were to be a study, it shouldn't be based on one practice."

The American Urological Association (AUA) has never reported any data linking March Madness, or other sporting event, to an increased number of vasectomies performed. However, a report from CNN in 2014 quoted Dr. Ed Sabanegh, chairman of the Department of Urology at the Cleveland Clinic, as saying his practice performs about 50% more vasectomies in March.

Dr. Nangia thinks the idea that "vasectomy appointments skyrocket in March" might be an illusion. He explained that since many practices promote getting vasectomies in March (i.e., giving away free pizza coupons with appointments) it may simply just feel as though more men are undergoing the procedure in March. Until a study is done to find out if U.S. men line up in droves for a vasectomy during March Madness, we may never know for sure.