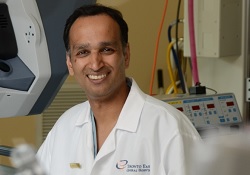 In a recent episode of the Urology Care Podcast, Dr. Rajiv K Singal sat down with us for a chat about urethral stricture disease.

Dr. Singal is a urologic surgeon at Michael Garron Hospital and Assistant Professor in the Department of Surgery at the University of Toronto.

Stricture (narrowing of the urethra) can happen at any point from the bladder to the tip of the penis. This narrowing restricts or slows the flow of urine. Men are more likely to have a urethral disease or injury because of their longer urethra.

To learn about the causes, symptoms and other facts, listen to the podcast episode below and/or read its transcript. You can also read our urologic condition article on Urethral Strictures.

Dr. Singal: Hey, my name is Dr. Rajiv Singal, I'm a urologist in Toronto. I work out of the Michael Garron Hospital, which is affiliated with the University of Toronto. I'm assistant professor in the Department of Surgery here in Toronto. I have a full urological practice with a focus on urology, which is the treatment of kidney stones as well as prostate cancer and robotic surgery. As a growing area of interest, I've been working as our university lead to develop, a global urology platform in the developing world.

I've worked in Malawi and in Kenya and Africa, and have a little trip planned to Jamaica to do a urology project later this year.

Host: Can you describe what a urethral stricture is?

Dr. Singal: Sure. Well, so maybe it's best just to sort of describe what a stricture is in medical parlance, that usually refers to a narrowing of a tube. It's a scar tissue if you will, and it can be really in any tube. You can have a stricture in the esophagus and the bile duct. As urologists, of course, we're in the business of the plumbing of the urinary tract and so the urethra is the tube that drains from the bladder, in men and women. The term stricture refers to a narrowing or a scar that develops along that pipe which can lead to blockages in the outflow of urine.

Host: How common is this urologic condition?

Dr. Singal: Well, it's hard to say. I think it really depends on where you are. So, you know, as I said, I do some work overseas and in Africa. And if you work in that environment, I would say maybe one in five men that I see for voiding dysfunction might have issues with urethral strictures. It's very common in that environment and it really comes down to trying to understand the causes which obviously will be different in different populations.

Host: What are some of the causes?

Dr. Singal: Sure. Essentially, when you scar something it implies that there was an injury and that is no different for urethral strictures than anything else. So typically there's been some injury to the urethra over the course of time and so the classic causes can be broken down into trauma. Someone who has a history of an injury of some kind, whether it's a motor vehicle accident or a straddle injury on a bicycle seat, that's not an uncommon cause. The other sort of big, broad cause would be related to infections. Sexually transmitted diseases are potentially a common cause of developing urethral strictures as they heal.

Then the other broad category is again, related to an injury or trauma when someone has a previous history of urological instrumentation. Somebody who may have had a prostate surgery or even kidney stones where there was a need to put scopes in. In a small group of patients it may cause a stricture as time goes on. Somebody who's had a long-term indwelling urinary catheter may develop a stricture. But the general broad term probably is that this reflects an injury and the body's response to that injury.

Host: What are some ways to know that you have it?

Dr. Singal: These urethral strictures tend to affect men more than women. You would notice a change in your flow of urine and so I think as a starting point, somebody who senses that the flow has slowed down; it needs to then be evaluated both by their primary doctor and potentially a urologist. So it becomes one of the things in a long list of potential causes that would be on the docket but, typically, it would be something that requires a workup and evaluation by a urologist to help sort out that source of a blockage compared to say an enlarged prostate.

So certainly, a younger man who may not have yet developed the time involved to enlarge or grow a prostate may see a slow urine flow as a particular sign of a stricture. If you certainly combine that with a background of one of the things I mentioned earlier such as a previous infection, or some kind of instrumentation of the urinary tract, or some other type of injury... that would obviously heighten one's suspicion.

Host: How might the symptoms be different in a man versus a woman?

Dr. Singal: Well, I think in both men and women, it would be related to a slowing of the urinary flow. I mean, it's just simple plumbing in many ways that if you have a tube that's more narrowed, the flow may be slower. I think, in fact, it will be probably not that much different in terms of what a man or a woman might complain about, just by virtue of the nature of the female urethra, which tends to be shorter. It's just less susceptible to stricture. I think the most common symptom is one of the slowing flow of urine and a sense of not feeling empty. It's usually persistent.

Host: Is there any prevention tips you can give us for urethral strictures? How can you prevent them?

Dr. Singal: Well, in terms of preventing urethral strictures, it probably speaks to going back and understanding the causes. I mean, obviously if you could take a step back and say with respect to, you know, even just general safety, whether it's wearing your seat belt and following the speed limit and following the rules of the road, I think that's from a public health perspective, a common thing. Certainly given that sexually transmitted diseases are a potential cause and certainly that's the big explanation for what I see in terms of prevalence when I go away to Africa. I think it really is a lot around STDs or sexually transmitted diseases.

From a prevention perspective, all of the things that need to be followed around protection and safe sex would be an important thing to prevent and minimize the risk of an infection which can then minimize the risk of a stricture. And then certainly around urological instrumentation, if you were going in for another type of operation, whether it's a heart bypass, or a hip surgery where catheters may be left in around the time of surgery. Certainly taking steps to get rid of the catheter that might be in the bladder as soon as we can medically find that feasible is a good thing to do.

Host: Do you have any diet advice or does diet play a role at all in strictures?

Dr. Singal: Not particularly, I think aside from the fact that if you do have some urinary symptoms in general, how you treat it might, in fact, be just ultimately related to how bothered you are by it. I think some of the things that irritate the bladder maybe just things to be mindful of, whether it's caffeine or alcohol consumption. Not that it changes the outcome, but it might make some of those milder symptoms that you might otherwise manage conservatively more accessible to be from a coping perspective.

Host: What are some of the most common ways that a urethral stricture is treated?

Dr. Singal: I think the starting point, as with anything urological, is trying to assess bother. So a conversation might ensue where in fact the right treatment is just to follow it along and not do anything and wait for symptoms to emerge or progress, if there's otherwise no pressure or effect on the bladder or on the kidneys.

And then, generally speaking, you can either dilate the stricture, you can stretch it open or you can ultimately repair or physically excise that segment, which does require specific expertise in urology but the standard tends to be related to simply dilating, using a scope and stretching things open. Now you can imagine by virtue of doing that you're essentially taking an area that scarred and cracking it open. A conversation with your urologist will be very important in terms of understanding the goals and what those outcomes might be because simply repeated instrumentation, repeated dilatations can in and of itself potentially cause that stricture to narrow down some more.

So for the most difficult strictures, what you really want to do is something called a urethroplasty and again, this usually requires some specialty expertise within our urological specialty. That's a significant reconstructive procedure that certainly is part of what can be done for the more difficult ones down on the road.

Host: Why was it was so important for us to have this discussion today?

Dr. Singal: I think urethral strictures are not necessarily thought of in the general public as a source or a cause of urologic pathology. It really is another type of blockage that we deal with commonly as urologists, and particularly for younger men, I think there's an awareness that needs to be developed around this. If you do have these changes, there's a tendency to, essentially blame everything on an enlarged prostate, which is just not something that you would see in younger patients.

I think the other reason why I think it's an important discussion, is from a public health perspective. As we have talked about earlier in this podcast, it does lend itself to a conversation around good health prevention, whether it's practicing safe sex, whether it's demonstrating good sense around driving a car and a motorcycle. There's so much of what we see with strictures that can go back and start to trigger a conversation around that sort of prevention side.

Sign up to receive information from the Urology Care Foundation!