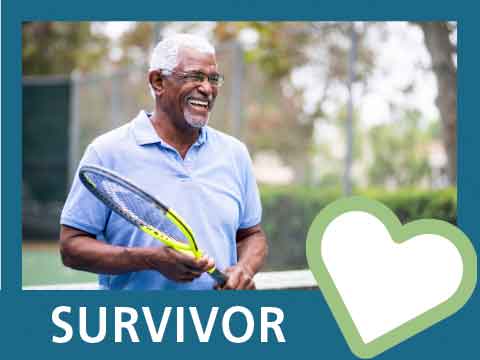 Craig was on his way to lunch when he received the call from his doctor saying, "Craig, we found cancer." At the age of 67, Craig was healthy, active and enjoying his retirement. When he began feeling the need to use the restroom more often, he decided to visit a urologist. There, Craig learned his prostate was enlarged and his prostate-specific antigen (PSA) test levels were high. "I was sent to have a biopsy (tissue sample). That's when they found I had early stage 2A prostate cancer," Craig said.

Prostate cancer is the second most common cancer among men. It is also the second leading cause of cancer death in men. One of Craig's first thoughts was, do I have the cancer somewhere else in my body? Many prostate cancer patients have the same thought and often go through a routine bone scan when they are first told they have cancer. This scan allows the doctor to tell if the cancer has spread.

For the test, a very low dose of radioactive dye is put into a vein in the arm. The dye travels through the body and is then drawn to parts of bone that are not healthy. These show up on the screen as spots, which are also known as "hot spots." These "hot spots" could be signs of cancer, arthritis (disease of the joints that causes swelling, pain, heat and a sense of stiffness), older injuries or other bone problems. To find out what exactly is causing the "hot spots," more tests may need to be done.

"When I sat with my urologist to talk about the diagnosis and next steps, I asked to have a bone scan right away. I wanted to know whether the cancer had spread from my prostate to my bones. Based on what I read online, I thought it was the next step," Craig said. He then discussed the risks, benefits and costs of a bone scan with his urologist, and learned cancer spreading to the bone is much more common in fast-growing cancer or in the later stages of prostate cancer. Based on his diagnosis and stage of illness, Craig and his doctor decided a bone scan was not needed.

Discussions like the one Craig had with his doctor are an important part in shared decision making for the best possible outcomes after a cancer diagnosis.

Click here to learn more about early-stage prostate cancer and questions to ask your doctor.