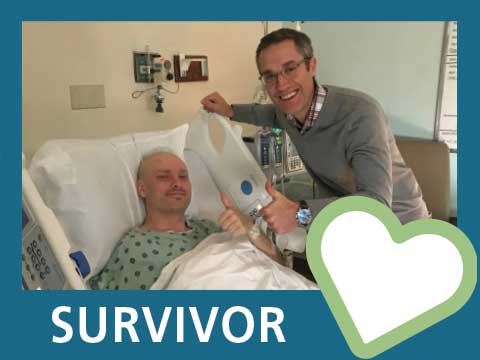 In late 2016, 24-year-old Steven from Virginia Beach, Virginia noticed that his left testicle seemed to be growing. It was tender and hurt when he touched it, but being young, he never thought it was anything serious.

To figure out what was going on, he “Googled” his symptoms.  He found that it was normal for one testicle to be slightly larger than the other, so he went on about his life for the next two years and didn’t seek care.

One night when he was driving home from work, he felt an unusual pain in his back. He remembered when he was searching for a cause for his testicle pain that testicular cancer can spread up to the back. That’s when he started to get worried.

He decided to see his primary care physician who performed a testicular cancer screening but didn’t see anything out of the ordinary. She ordered an ultrasound. A week later he received a call that a mass was found in his testicle and he was being referred to a urologist just a few days after his 25th birthday.

At that appointment, he was told that 9 times out of 10 a tumor like that is cancer and it should come out immediately. Arrangements were made for him to have the operation the very next day. He was in shock that all of this was happening so fast, but he trusted his doctor and moved forward.

His urologist removed his left testicle and recovery went well. After about a week, Steven was back to normal – or so he thought.

The next step was a post-surgical CT scan of his chest, abdomen, and pelvis and a consultation with an oncologist. The results revealed that the cancer had spread to a lymph node in his retroperitoneum. He began a difficult schedule of chemotherapy for five days a week, four hours a day over the course of four weeks with two weeks off in between treatment sessions. This went on for three months.

A few weeks after his chemotherapy ended, he had another CT scan that showed his lymph node had shrunk, but not enough. His doctors recommended a Retroperitoneal Lymph Node Dissection (RLND). He was concerned about the procedure but trusted in the medical professionals.  He went ahead with the surgery and recovered well.  Now he is cancer free.

Steven says that lasting effects are more mental. He worries that every little problem with his body is a sign that the cancer had come back. He has phantom pains where his left testicle used to be and in his back where he felt the swollen lymph node at the beginning of his journey.

He tells his story every chance he gets because he wants to encourage men to not be afraid to get screened for testicular cancer and to see a physician if they think something is wrong. If they don’t, they could be prolonging a terrifying diagnosis.

To listen to another testicular cancer survivor story, check out this recent podcast:
Testicular Cancer Survivor, Matt Ode, Shares His Story of Hope, Purpose, and "Winning the Day"