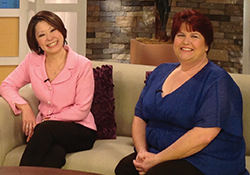 Becca Martin has been dealing with Overactive Bladder (OAB) much of her life. Before she was treated, Becca sometimes urinated 40 times a day-as often as every 20 minutes. This made it impossible for her to take the bus to work. Even when she went to the bathroom at work and then again at a store next to the bus stop, Becca didn't want to have to ask the bus driver to pull over during the 25-mile drive home.

"My symptoms got worse to the point where I could not drive into work anymore without having to make sure I had enough time to stop somewhere," she says. Whenever she drove into Tacoma or Seattle, she would have to add an hour or two to the trip to account for all the rest stops she had to make.

Her primary care doctor referred Becca to Dr. Kathleen Kobashi, who diagnosed her with OAB. Tests showed Becca's bladder was telling her brain "I have to go" all the time, instead of just when the bladder was full. For medical reasons, Becca didn't have the option of taking OAB oral drugs so Dr. Kobashi explained her other treatment options. Becca chose a bladder pacemaker, which delivers electrical pulses to the nerves to change how they work. A pulse generator device the size of a silver dollar is surgically implanted into the buttocks.

Becca has had tremendous results. One day, soon after she had the surgery, she and her boss were amazed to realize it had been six hours since Becca had last gone to the bathroom-a far cry from the several times an hour she used to go. "I don't have to worry about running to the restroom every 20 minutes," she says.

Becca urges anyone with OAB symptoms to talk to their doctor about it right away. Together you can find out if you have OAB and what treatment is best for you. As Becca knows, treating OAB can change your life.