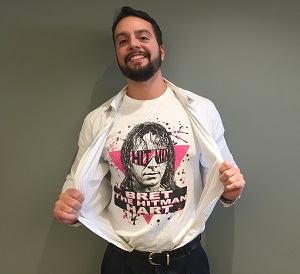 Growing up as a sports-crazed youngster in Rhode Island, I savored the times I snuck behind my parents' back and watched pro wrestling on television. I adored every second of the cast of characters that wrestling paraded in front of me, but no one made me cheer louder than Bret Hart.

Coming to grips with the fact your childhood heroes are human is an unpleasant part of adulthood. I learned that Bret had prostate cancer yesterday. It hit me with great sadness to know that someone who's made my world a more colorful, fun (and ultimately happier) place is facing cancer.

No longer sneaking behind my parents' back to watch wrestling, I find myself in a role that can help educate people on what Bret is facing. I'm an Outreach Specialist for the Urology Care Foundation and part of my job is to get the word out about prostate cancer. It is a reality we all must face as men and it affects those we love deeply.

All these years later, Bret is still one of my idols. Although he has long since retired, like any great form of theater, I lose myself in the action while watching his old matches.

The older I get, the more I appreciate what it takes to be a pro wrestler. In addition to athletic skill, you need strong acting and public speaking skills. I also respect what it takes to maintain a top physique through constant training, diet and exercise.

As the pride of Calgary, Alberta, Canada, Bret stood out among the other wrestlers. He won us over by giving out his trademark sunglasses to kids sitting ringside before each match. In a business where it seems impossible to be humble, Bret was just that. Most of all, he was an absolute technician inside the ring. He knew the moves inside and out-- executing the most dangerous of moves (for both him and his opponent) with pinpoint accuracy and a swagger.

Prostate cancer is the second most common cancer in men. 1 in 7 will be diagnosed with this disease, but the odds increase to 1 in 5 if they are African American and 1 in 3 if they have a family history. Prostate cancer is also the second leading cause of cancer-related death among men, and there are often no symptoms.