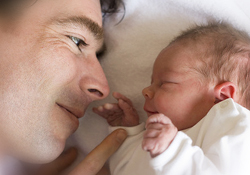 What we do for love! You had a vasectomy knowing that, without a doubt, more kids were not a part of your future. Yet now, here you are, looking to have more rug rats. And this comes right after spending gobs of time and money sorting out the four C's of the diamond ring thing.

The Fork in the Woods

When does it all end? Well, it pretty much ends with the baby. And to get there, you have two choices: IVF-ICSI or vasectomy reversal. With reversal, conceptions are possible in the privacy of your home, while IVF babies are conceived in a fluorescent-lit laboratory. There are about 100 other differences between these approaches, but lets focus on outcomes for a moment.

So, what do the conception curves look like with IVF-ICSI and reversal? Conception after IVF-ICSI is near immediate; you know the answer 2 weeks or so after the embryo transfer procedure. Problem is, you can only get pregnant after embryos are transferred, whether fresh or frozen. And that means pregnancies can only occur after medical procedures in fluorescent-lit offices. So the conception curve is a stuttering one with periods of no opportunity interrupted by spikes of opportunity.

With reversal, the conception curve has much more smooth, even-Steven look. After a single procedure and a 3-4 week wait (which men typically hate), the fun begins. The chance of conception rises monthly as the semen analysis improves and, unlike with IVF-ICSI, there is always a chance of conception.

Interestingly, in our published work, after vasovasostomy procedures, the vast majority (77%) of men had motile ejaculated sperm within 3 months of the reversal. This reached the high 90's by 1 year. That means that conceptions are possible (and actually occur) very soon after reversal procedures. And to boot, you can avoid fluorescent-lit rooms (unless they turn you on, of course).

So for planning purposes, here is an approximate time frame to expect natural conceptions after the various types of vasectomy reversal procedures:

It has also been my experience that "normal" sperm counts and motilities are hardly ever needed for women to conceive after reversal. Most women need more than simply zero sperm to get that bun in the oven. My personal record for conception with low sperm counts after reversal: A 42-year old woman conceived within 6 weeks of surgery with 100,000 motile sperm in the ejaculate. (Yes, I hugged her and complimented her on her fertility. He was upset that it happened so early, as he lost out on months and months of fun trying).

Taking it home here, the pregnancy rate after IVF-ICSI can be very high, but it all occurs in one or two months, so to speak. In contrast, the pregnancy rate with reversal is equal or higher but is spread out over a longer time frame. Your choice of approach depends, in part, on what kinds of roads you like to take.