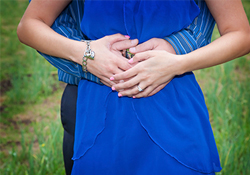 Have you ever lost your wood when you wanted it most? Be honest. NEVER? Well then, you obviously haven’t lived through the slings and arrows of infertility.

You’ve heard me say before that stress kills your love life. My favorite analogy is the caveman being chased by a woolly mammoth. Who wants to have sex when your “fight or flight” response is in high gear? Believe me, those trusty sex organs know the drill and do their best to get out of the way during flights from mortal danger. Funny thing is, they respond similarly to other, less threatening forms of bodily stress. And this is the pickle that we can find ourselves in as we scurry around doing what we do every day.

It seems evolutionarily counterproductive that trying to have sex can make having sex harder. But alas, it’s true. A recent study from South Korea examined the sexual performance and perceived stress of infertile men during and outside of “that time of the month,” that is, when their partners were fertile. And, you guessed it; they observed large differences in stress and sexual performance between fertile and non-fertile periods of the month. Here are the juiciest findings from the study:

Let me also point out that these men were medically evaluated for the study and all deemed “normal.” In addition, those with other risk factors for erection issues were excluded from the study. So, even among young, robustly healthy men, infertility can wreak havoc on sexual performance. A butterball of a mammoth but a mammoth nonetheless.

I can only imagine what other kinds of “mammoths” are out there, subtly dousing the fire in our loins. For now, my best advice is: Just say no to stress.