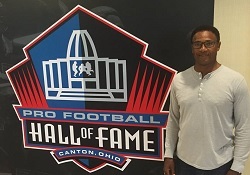 The Know Your Stats about Prostate Cancer campaign and spokesman Mike Haynes traveled to the Pro Football Hall of Fame in Canton, Ohio last week to raise prostate health awareness. Mike is a Hall of Fame defensive back from the New England Patriots and Los Angeles Raiders. He is also a prostate cancer survivor.

The National Football League (NFL) and Urology Care Foundation teamed up in 2007 to start the Know Your Stats campaign. It's a rallying force to connect, educate and inspire men to know their prostate cancer risk and talk to their doctor about whether prostate cancer testing is right for them.

Prostate cancer is the second most common cancer in men. It will hit 1 in 7 men. As part of Know Your Stats' outreach, Mike visits Canton every August to spread education on the disease. The audience in Canton is very large at this time of year. National and local media, NFL Players, fans and their families flock there for the Hall of Fame's annual enshrinement ceremony and preseason game.

Mike interviewed with several sports talk radio stations throughout the country during his time in Canton to spread awareness of the disease. Some of the highlights from his interviews include:

Know Your Stats would like to thank Mike and all the friends, family and members of the Pro Football Hall of Fame for helping make the week a success!