AUA Summit - Who is at Risk for Prostate Cancer?

Who is at Risk for Prostate Cancer?

Who is at Risk for Prostate Cancer? 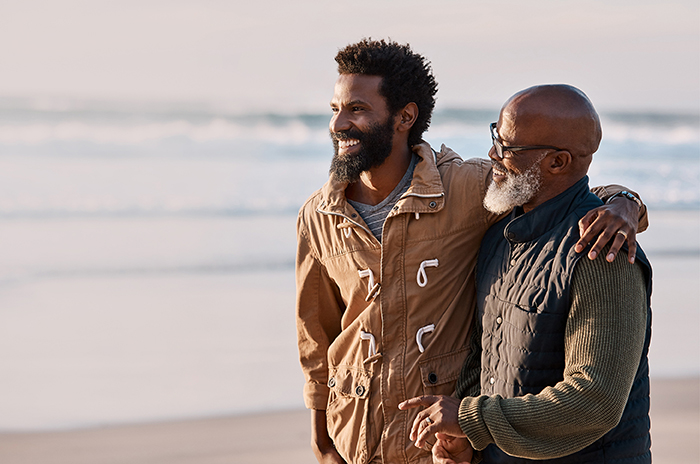 The prostate is a gland in the male reproductive system. It helps makes the fluid that carries sperm (semen) and is about the size of a walnut. The prostate gland sits just below the bladder, which is the organ that collects and empties urine, and is in front of the rectum (the lower part of the large intestine that ends at the anus). The prostate also surrounds part of the urethra, or the tube that empties urine from the bladder. That’s why some men experience urination problems when they have prostate cancer or an enlarged prostate.

Prostate cancer happens when cancer cells form in the prostate gland. About 1 in 9 men will be told they have prostate cancer. As stated by the American Cancer Society, nearly 192,000 new cases of prostate cancer will be found this year and roughly 33,000 men will die from the disease.

Your risk factors for prostate cancer rise if you are age 65 or older, having a family history of prostate cancer, are African American or having inherited mutations of the BRCA1 or BRCA2 genes. Signs and symptoms of prostate cancer may involve a weak urine flow or one that starts and stops, low back pain, pain with ejaculation or urination and blood in your urine or semen.

The good news is that many men survive prostate cancer. For example, there are more than 3 million men in the US who consider themselves prostate cancer survivors.

“There are a number of things that we can do if someone is told they have prostate cancer,” said Brian McNeil, MD, a urologist with SUNY Downstate Health Sciences University in Brooklyn, New York. “The most important thing is for men to have a talk with their doctor about when to start prostate cancer screening.”

The word “screening” means to look for cancer before a person has any symptoms. Screening helps find cancer at earlier stages when it may be simpler to treat. Prostate cancer screening involves the prostate-specific antigen (PSA) blood test. A digital rectal exam may also be done as part of a prostate cancer screening. This test screens for lumps in the prostate or anything else that seems unusual.

“Most people don't know what the BRCA1 and BRCA2 genes are and why they are important,” said McNeil. “Sometimes there are mistakes or errors in our DNA. BRCA1 and BRCA2 are genes that are involved in the repair of DNA. They help fix mistakes in DNA. If there’s a mutation in BRCA1 or BRCA2, then your DNA isn’t able to repair itself as well as it could otherwise. So there could be mistakes and those mistakes could lead to cancer.”

Though the risk of getting prostate cancer is impacted by both the BRCA1 and BRCA2 gene mutations, BRCA2 appears to play a larger role in prostate cancer. One study found that BRCA2 mutations were linked to more aggressive prostate cancers and poorer outcomes.

If your urologist suggests genetic testing because of family history or because you have an aggressive prostate cancer, they may give you a referral to see a genetic counselor. Genetic testing looks for certain inherited changes (mutations) in a person’s genes and can help determine if a cancer is hereditary. About 5 to 10 percent of all prostate cancers are believed to be hereditary.

Your urologist may also order genetic tests directly and only send you for genetic counseling if the results are positive or uncertain. To find out if you have a genetic mutation linked to prostate cancer, you may take a simple blood or saliva test. Health insurance groups often cover genetic testing and counseling if they are considered medically necessary.

A urologist is one type of specialist who can treat prostate cancer. A urologist may suggest different treatments based the characteristics of your prostate cancer and your goals for care. For example, some men want to get the prostate cancer removed as soon as possible so they don’t have to worry about it. Other men may choose to avoid certain treatments because they’re worried about incontinence (leaking urine) or the erectile dysfunction that may result from prostate cancer treatment.

“Active surveillance is great for some men, but it’s not for everyone,” said Dr. McNeil. “As long as you have an open and honest talk with your doctor about what your concerns are, we can help you to make the best decision for you.”