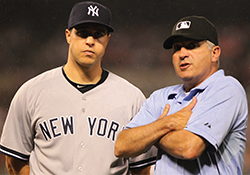 Longtime Major League Baseball (MLB) umpire John Hirschbeck knows the uneasy feeling that comes with having a urologic health scare. He has overcome serious threats to his own urologic health on more than one occasion. Each time, his strength, family, friends and the quality of care he received, has kept him positive and allowed him to get through it.

Hirschbeck, a member of the Urology Care Foundation Board of Directors, was first diagnosed with testicular cancer in 2009. The tumor was removed, but he was told there was a five percent chance of the cancer returning. Then in 2010, two weeks after an abnormal blood test result, he learned he needed a prostate biopsy. Knowing there was a chance he had prostate cancer, Hirschbeck made the decision to get behind home plate and umpire what would turn out to be an historic playoff game in Philadelphia. That night Roy Halladay threw the second “no-hitter” in MLB’s postseason history.

“When you’re on the field for those three hours, nothing can get to you. You’re in the zone,” Hirschbeck said. ”I have the other 21 hours of the day to deal with the other stuff.” After working the World Series that season and receiving his biopsy test results, he learned he did not have prostate cancer.

Then, a little more than two years after his first diagnosis, John found himself in his doctor’s office with severe lower back pain. After a brief check, he was sent straight to the hospital where he learned a large cancerous tumor was pushing on his kidney. He was put on dialysis for three days. His tumor was removed, and with the help of his family and caregivers, his body successfully fought testicular cancer once again.

“In each of my experiences with urology, I felt so taken care of - even when I was afraid,” Hirschbeck said. “As difficult as everything was at times, the medical staff made an impact on me. The care and compassion I received from them gave me hope and made me feel better,” he added.

When asked to join the Urology Care Foundation’s Board of Directors in 2014, he was thrilled to be able to help out. “I jumped on the opportunity as a way to get involved and give back. It is a way I can possibly help someone who might have to go through the same thing I did,” he stated. Hirschbeck and his family have been involved with donating their time and money to charities for more than 20 years.

Hirschbeck will enter his 33rd season umpiring the big leagues in 2015. He has umpired in MLB All-Star Games and four World Series. In addition to Halladay’s “no-hitter,” Hirschbeck has been the home plate umpire for some of the most historic baseball moments in recent years. He umpired Barry Bonds’ record-breaking 756th home run in 2007 and Mariano Rivera’s all-time best 602nd save in 2011.

As a cancer survivor, Hirschbeck said he takes nothing for granted, “I go out, do the best I can, enjoy each day and appreciate everything I have.”