AUA Summit - Ask the Experts: What is Peyronie’s Disease?

Ask the Experts: What is Peyronie’s Disease?

Ask the Experts: What is Peyronie’s Disease? 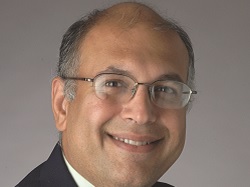 Peyronie's Disease is when scar tissue forms under the skin of the penis. This scar tissue can cause the penis to bend or become indented during erections. It's estimated there are more than 200,000 cases in the U.S. each year.

Peyronie's Disease is likely caused by a minor injury to the penis. This type of damage could be caused by rough or strong contact during sex (such as bending the penis during penetration or pressure from a partner's pubic bone). It can also be caused by sports or other accidents.

Make sure to speak up if you think you have symptoms of Peyronie's Disease. Talk to your health care provider and start your journey to recovery as soon as possible.

Dr. Ajay K. Nangia is Professor of Urology and Clinical Director of Andrology at the University of Kansas Medical Center. He is a member of the Urology Care Foundation's Public Education Council.