Urotrauma: A Devastating but Little-Known Injury of War 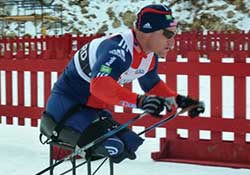 While on foot patrol in Afghanistan one day in early September 2009, 29-year-old Navy SEAL Lt. Dan Cnossen stepped on an improvised explosive device (commonly known as an IED), which exploded. Fortunately, Dan survived the blast, but he suffered horrific injuries.

IEDs are homemade bombs, made in a variety of ways and often easily hidden, usually on roads and walkways. They have caused more U.S. military casualties in Afghanistan and Iraq since 2001 than traditional weapons. Especially in Afghanistan, where many roads are not passable by motor vehicles, soldiers are constantly in danger of stepping on an IED. Due to the nature of IED blasts, the resulting injuries are often more complex than bullet wounds. Frequently, soldiers lose both their legs—and often the extent of the injuries does not stop there.

As many as 12 percent of combat-related injuries from casualties in Afghanistan and Iraq have resulted in a type of injury collectively called “urotrauma.” As American Urologial Association (AUA) member urologist and Operation Iraqi Freedom veteran Dr. Mark Edney explained, “urotrauma includes any damage to the urinary tract or reproductive organs (including the kidneys, ureters, urinary bladder, urethra, and male and female genitalia) from a penetrating, blunt, blast, thermal, chemical or biological cause.” The extent of urotrauma may be very severe. It can affect one’s sexual function, fertility and ability to urinate. According to Dr. Edney, “while urotrauma may not be as readily apparent as amputations or as widely discussed as neuropsychological wounds of war, including post-traumatic stress disorder (PTSD) or traumatic brain injury, it is no less physically and psychologically debilitating.”

When Dan stepped on that IED, “everything was a blur.” His fellow soldiers acted quickly and got him to safety, but significant damage had already been done. Dan needed to have both legs amputated above the knee. Beyond that, he had a fractured pelvis and injuries to the bladder, urethra, scrotum, testicles and rectum.

Dan was stabilized at a military hospital in Germany. He was then sent to Walter Reed National Military Medical Center in Bethesda, Maryland. There he spent several months undergoing more than 30 surgeries. “I was very happy with the quality of care I received. My medical team really could not have been better,” Dan reported. “But,” he says, “the doctors couldn’t fix everything at once because my injuries were very complicated. There were also some things that were just beyond repair.”

“Part of my testicle is gone, and my urethra was severed. The tissue died. There was no chance of repairing the pathways completely.”

According to Dan, “the worst part is the colostomy bag and the catheters. And having to wake up at night to go to the bathroom more often. The surgeons rebuilt my bladder, but it’s smaller now, so it doesn’t hold as much. I also have a problem where sometimes I spasm and urine leaks out of my wound site. But I’ve learned to deal with it.”

“Recovery is all about having a positive attitude,” Dan explained. “I always think to myself, ‘It could be worse.’ It turns out I can still have kids if I want to. Not the traditional way, but the tests say I’m still producing sperm. I still have a healthy testosterone level.”

“While urotrauma may not be as readily apparent as amputations or as widely discussed as neuropsychological wounds of war...it is no less physically and psychologically debilitating.”

Unlike Dan, many wounded warriors end up infertile as a result of urotraumatic injuries. This can have a dramatic psychological effect on men and women alike.

“I couldn’t think of anything more devastating than not being able to have kids,” said former Marine and 27-year-old New Yorker James Byler. “For me, it was much worse than coping with the loss of my legs.” James joined the Marines after he graduated college, and was deployed to Afghanistan in September 2010.

“I stepped on an IED just a month later, on the morning of October 17,” James remembered. “It was almost like being in a dream, because I sort of knew what was going on, but not completely. I was in so much shock that I didn’t feel any pain at that time. But I could see right away that both my legs were gone above the knee. There was blood everywhere, and honestly, I’m a man, so the first thing I remember thinking was ‘what about my penis?’”

James’ fellow Marines jumped into action immediately after the blast. The alleyway where he was wounded was too narrow for a nearby Afghan pickup truck to fit through, much less a medevac helicopter. So James was put in a wheelbarrow and pushed to the pickup truck. “My friends were good at thinking quickly on their feet,” James said. He was then transferred to the back of the truck to be taken to his base. “They had to hold me down in the back of the truck because the roads were so bad and bumpy, and we were driving for about 20 minutes,” James remembered. “They started treating me right there in the back of the truck, with bandages and tourniquets. They acted very quickly and did well. It’s amazing what people can do in that kind of situation,” he said. “I was awake the whole time, but at first I couldn’t talk, I was too shocked.” When James’ shock lessened enough for him to speak, “the first thing I did was ask my buddy to pull down my pants and look to see if that part of me was ok. He thought I was crazy, but I had to know.”

James was airlifted to Germany for further medical attention. “At one point, I woke up there and found out that my testicles were swollen. The left one had lost some mass and the right one needed stitches,” he remembered. By the end of that week, James was brought to Walter Reed. “I couldn’t tell you how many surgeries I had, but it was a lot,” James recounted. “The doctors were operating on me for two or three months,” he says. “I remember I kept asking if my reproductive system was going to work. They told me that I had blood flow to the area, but they were concentrating on my vital organs first,” James says. “I thought to myself: ‘what do you mean? I’m a man, that’s the most vital organ.’”

James was also doing physical therapy; and by January 2011, he started using prosthetic legs. “That was a full-time job. Each day for eight months I concentrated on my exercises for four or five hours,” James remembered. “I made small improvements every day.” Still, James remained concerned about his fertility and visited a urologist in February 2011. His tests came back negative for sperm. “The doctor told me it was possible that my body had just shut down sperm production while recovering from my trauma. There was no way to know at that point if it would come back,” he remembered. “That was a very difficult time for me. I was really depressed, and it was hard for me to feel positive about anything.”

The following August, James was finally able to live on his own, and moved into an apartment. “Getting that sense of independence back was really important to me,” he remembered. “It helped me start to move on, and I knew I was ready to leave the military,” James said. He started an internship with the National Security Administration, working as an analyst. “I can’t share all the details,” James explained, “but I was actually tracking IED cells—pieces used to make the same type of weapon that injured me.”

Soon after James began his internship, he returned to the urologist for another fertility test. This time, he tested positive for sperm. “It wasn’t enough to conceive naturally,” James explained, “but I learned I can bank my sperm and have kids through in-vitro fertilization.” That day was a turning point for James’ outlook and his recovery. “It meant a lot to me. I’m not ready for fatherhood yet, but I had always seen myself becoming a dad someday. I realized then that my injury wasn’t going to stop me from having the life I wanted,” he said.

“I couldn’t think of anything more devastating than not being able to have kids...for me, it was much worse than coping with the loss of my legs.”

To help prevent others from experiencing everything he went through, James suggests that all soldiers being deployed to a combat zone be given the opportunity to bank their sperm or harvest their eggs. “It was the last thing on my mind when I left for Afghanistan. I had never even heard of urotrauma before. I want to do what I can to raise awareness, anything I can do to help.”

As for urotrauma prevention in the field, “soldiers are issued a groin-protective garment that attaches to their tactical vest, but the triangle-shaped shield’s design and positioning is felt by many to be awkward,” Dr. Edney explained. “It is suspended by snaps, is large and cumbersome and not easy to wear. Most soldiers don’t wear it because it prevents them from moving freely.” Dan and James agree. According to Dan, “wearing that garment makes it hard for us to do our job, because we can’t move that easily. It depends on your mission, but most soldiers aren’t going to wear it.” Dr. Edney is working with the AUA Legislative Affairs Committee. They want Congress to pass legislation that would raise awareness of urotrauma, provide data to inform trauma research and improve urotrauma prevention and treatments. In March, Rep. Brett Guthrie (R-KY-2) introduced the bills H.R. 984.

“This issue needs attention. Addressing urotrauma is vital for our soldiers’ and veterans’ well-being and their future,” Dr. Edney stated. Dan and James are both living examples of how urotrauma can be overcome. Since he received the results from his second fertility test, James has started to pick up the pieces. He is now enrolled in graduate school at New York University’s Stern School of Business and looks forward to a promising internship this summer. As for Dan, he was awarded a Purple Heart and Bronze Star with V (for valor) from the Secretary of the Navy for his bravery on the day he was injured. Today he is still in the military, serving active duty at Fort Carson in Colorado. This location allows him to train for the U.S. Paralympic Biathlon/Cross-Country team. He now plans to compete in the 2014 Paralympics in Sochi, Russia.

“At the tail end of my time at Walter Reed, I started going to training camps to strengthen my arms and upper body. Suddenly I had joined other wounded soldiers and veterans participating on the Paralympic team,” Dan explained. “I learned to walk again, and I just wanted to keep moving forward.”

Dan Cnossen hopes to represent the USA at the 2014 Paralympics Winter Games in Sochi, Russia.