Check Out the Summer 2013 Full Issue 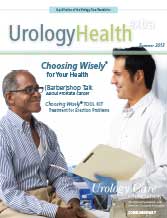 My Side - Stan Hardin, President of the Association of Peyronie’s Disease Advocates

Becoming President of the Association of Peyronie's Disease Advocates was not something I planned. Ten years ago, I started noticing the symptoms of Peyronie's disease. I tried doing Internet research, but I found there wasn't much information out there. …more

Choosing Wisely for Your Health

Craig was on his way to lunch when he received the call from his doctor saying, "Craig, we found cancer." At the age of 67, Craig was healthy, active and enjoying his retirement. When he began feeling the need to use the restroom more often, he decided to visit a urologist. …more 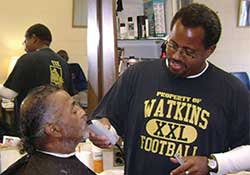 Two years ago, Mark*, a police officer from Indianapolis, learned being African-American put him at high risk for prostate cancer. The person who told him was not his grandfather, who passed away from prostate cancer, or his doctor. It was the barber who cut Mark's hair twice a month.…more