Choosing Wisely for Your Health 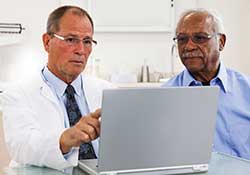 Craig was on his way to lunch when he received the call from his doctor saying, "Craig, we found cancer." At the age of 67, Craig was healthy, active and enjoying his retirement. When he began feeling the need to use the restroom more often, he decided to visit a urologist. There, Craig learned his prostate was enlarged and his prostate-specific antigen (PSA) test levels were high. "I was sent to have a biopsy (tissue sample). That's when they found I had early stage IIA prostate cancer," Craig said.

Prostate cancer is the second most common cancer among men. It is also the second leading cause of cancer death in men. One of Craig's first thoughts was, do I have the cancer somewhere else in my body? Many prostate cancer patients have the same thought and often go through a routine bone scan when they are first told they have cancer. This scan allows the doctor to tell if the cancer has spread. For the test, a very low dose of radioactive dye is put into a vein in the arm. The dye travels through the body and is then drawn to parts of bone that are not healthy. These show up on the screen as spots, which are also known as "hot spots." These "hot spots" could be signs of cancer, arthritis (disease of the joints that causes swelling, pain, heat and a sense of stiffness), older injuries or other bone problems. To find out what exactly is causing the "hot spots," more tests may need to be done.

"When I sat with my urologist to talk about the diagnosis and next steps, I asked to have a bone scan right away. I wanted to know whether the cancer had spread from my prostate to my bones. Based on what I read online, I thought it was the next step," Craig said. He then discussed the risks, benefits and costs of a bone scan with his urologist, and learned cancer spreading to the bone is much more common in fast-growing cancer or in the later stages of prostate cancer. Based on his diagnosis and stage of illness, Craig and his doctor decided a bone scan was not needed.

As our nation looks for ways to offer higher-quality patient care, the overuse of tests and methods to treat different illnesses has become more of a problem. According to a survey published in 2011 by scientists at Dartmouth College, nearly half of primary care doctors say their own patients get too much medical care. And the Congressional Budget Office says up to 30 percent of the health care in the United States is not required. Many experts agree the United States has the costliest health care system in the world. However, according to an Institute of Medicine report, Best Care at Lower Cost, the American health care system wastes about $750 billion a year on health care costs. This includes $210 billion in needless or repeat tests or procedures. Take, for example, routine bone scans in prostate cancer patients. A March 2012 study led by Dr. Jim Hu of Brigham and Women's Hospital in Boston looked at 30,000 men with low- and medium-risk cancer. They found the cost of uncalled-for bone scans billed to Medicare (a government-run insurance program) over the span of two years was almost $3.6 million for these men (Medicare paid about $226 for each bone scan). A different 2011 study found the price tag for 12 overused tests was around $6.8 billion. Some of these overused tests included yearly electrocardiograms (EKGs) for heart disease and imaging tests for lower back pain.

Many leading medical specialty and patient-care groups are working with the ABIM Foundation to urge doctors and patients to talk about the most helpful and cost-effective medical options for treating an individual's health problem. These groups want to strengthen the value and safety of health care in America. This means helping the general public choose care that:

How To Know What Test or Process is Really Needed

As part of the Choosing Wisely® program, each specialty group has chosen five tests, processes or medical care options to "question." These most often used tests and care options may not be needed or helpful to all patients, therefore a doctor and patient should talk about whether to use them. The lists are titled "Things Physicians and Patients Should Question," and are designed to support a dialogue around the need—or lack of need—for many tests or processes used to treat a particular illness. The idea is to help make wise choices around the best care based on a patient's own health problem.

"Millions of Americans are realizing when it comes to health care, more is not necessarily better," said Dr. Christine Cassel, president of the ABIM Foundation. "Through these lists of tests, processes and health care options, we hope to spark discussions between doctors and patients about what care is truly needed."

Earlier this year, Bradley Erickson, MD, a urologist with the University of Iowa, was invited to work at a hospital in the Palestinian Territories. "It was very different from what I was used to in the United States. Many of the tests and latest imagery options I had access to in the States did not exist in Palestine. To get them, patients would have to travel to Jordan, which was logistically hard or just not possible. I quickly realized I wasn't always able to treat a patient or teach other doctors the same way I could in the United States — I also realized it wasn't always needed either. Using relatively basic tools, I found I was able to do all the things in Palestine with the same results as if I was using the latest tools back in the United States. The entire experience made me think twice about the way I take care of my patients back home."

Currently, more than 130 tests and processes to "question" have been released as part of the Choosing Wisely® campaign, and many specialty groups are sharing these suggestions with their members. These groups are made up of more than 500,000 doctors, nurses, pathologists (doctors who look at tissues and are responsible for correct laboratory tests), radiologists (doctors who read x-rays or other imagery tests) and other health care experts.

The campaign is also reaching millions of people across the United States through a number of partners, which is being led by Consumer Reports (CR). CR is the world's largest stand-alone product-testing company. It has worked with the ABIM Foundation to hand out easy-to- read products and information for patients and doctors to talk about. For example, a recent Consumer Reports article, Cancer Tests You Need, And Those You Don't, lists the new suggestion on Pap smears from the American College of Obstetricians and Gynecologists for patients and doctors to talk about. And CR's article What To Reject When You Are Expecting was just revised to include information on the risks of scheduling a baby's birth before its due date without a good health reason.

"Some would argue we perform too many tests here in the United States," said Dr. Erickson. "While I support advanced imaging and testing as a way to detect and treat a patient's health problem, more tests than are needed are often ordered, which raises costs, possibly subjects the patient to more problems and may offer little to no reward."

"Good medicine involves a discussion between a patient and doctor, no matter who starts the conversation," said Daniel Barocas, MD, MPH. "The Choosing Wisely® campaign is giving patients and doctors the important tools to starting this conversation. The AUA is honored to be a part of this program."

Choosing Wisely® advice should not be used to make decisions about what should or should not be covered by health insurance companies. Rather, the information is meant to spur a discussion about what is the best way to care for a health problem. As each person and illness is unique, doctors and patients should use the suggestions from the Choosing Wisely® campaign as a guide to selecting the best treatment plan together.

To learn more about Choosing Wisely®, visit ChoosingWisely.org. There, you can find more lists of tests and treatments that should be questioned and learn why.

For details and the complete list recommended by the American Urological Association, visit Choosing Wisely.

Five Things to Ask Before Any Health Test or Treatment

The ABIM Foundation suggests patients should ask five questions before they have any health test or treatment: