My Side - Stan Hardin, President of the Association of Peyronie’s Disease Advocates 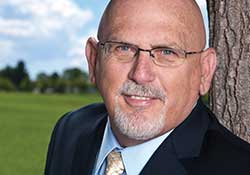 Becoming President of the Association of Peyronie's Disease Advocates was not something I planned. Actually, I'm a master plumber and contractor by trade. Ten years ago, I started noticing the symptoms of Peyronie's disease. I tried doing Internet research, but I found there wasn't much information out there. I went to see my primary care provider, who referred me to a urologist, Dr. Joel Kauffman. He made the official diagnosis—a classic case of Peyronie's disease, with scar tissue and penis curvature.

At that point I had no idea how much Peyronie's disease would affect my life. I thought a simple pill or shot would be able to fix it, but that was not the case. I went online and found there were many others living with Peyronie's disease who were frustrated. A lot more men have the disease than people realize. It is estimated, nine percent of men between the ages of 40 and 70 have Peyronie's disease. And many men are too embarrassed to come forward, so this is probably a pretty low estimate. Seeing all of these frustrated men online, I thought there should be a way to bring them all together. I thought, "There needs to be some kind of organization to represent the patient to the public and medical community."

It started as a very grassroots project. I had been developing websites on the side, so I knew I could create one for the Association. I got in touch with some health care professionals who wrote the medical content. The project grew as more people began to notice and take interest. We would get a lot of questions from people looking for specialists. So we started looking into which researchers were publishing data on Peyronie's disease. In 2003 we contacted Dr. John P. Mulhall. Dr. Mulhall is the director of the Male Sexual and Reproductive Medicine Division of Urology at Memorial Sloan Kettering Cancer Center in New York. He told us, "I'm very impressed with what your organization has done. I want to help connect you with other specialists." Then we were joined by Dr. Laurence A. Levine, director of the Male Sexual Function and Fertility program at Rush University Medical Center in Chicago. These men are now on our Board of Directors. They are joined by three other urologists and a clinical psychologist on our Medical Advisory Board. We bring together researchers, health care professionals and men living with Peyronie's disease to foster collaboration. We work to empower each man to be a true self-advocate. We do this by providing accurate, up-to-date information, meaningful support and a thorough knowledge of treatment options.

"One thing I cannot stress enough is if you have Peyronie's disease or any other condition, it's important to stand up and take ownership of it. Educate yourself as much as you can so you know what your options are and what to expect. Also, know, you're not alone." Peyronie's disease is not a rare condition; it's an underdiagnosed condition. The more men take ownership of it, the more support we will all have. If I'm going to be an advocate, what does that mean? I have to be able to stand up and say, "I have Peyronie's disease." It's my goal to raise awareness. And the only way to do that is to stand up and say, "I'm an average guy, and I have Peyronie's, and it could happen to anyone." Finally, don't be afraid to tell your wife, girlfriend or significant other. It will be worse if she thinks you're avoiding being with her because something else is wrong. I just celebrated my 32nd wedding anniversary with my wife, Cheri. She has stood by me through everything, and her support has made all the difference.

What is Peyronie' Disease?

Peyronie's disease is a condition in which painful, hard plaques (scar tissue) form beneath the skin of the penis. Most often, these plaques lead to curved erections. At times, men with Peyronie's disease have more than one plaque, which may cause complex curvatures. In other cases, the scar tissue causes divots or indentations rather than curvature. In some men, an extensive plaque that goes all the way around the penis may develop. These plaques typically do not cause curvature but may cause a "waisting" or "bottleneck" deformity of the penile shaft. In the most severe cases, the plaque may accrue calcium and become very hard, almost like a bone. Along with penile curvature, many patients also report shrinkage or shortening of their penis. In whatever form Peyronie's presents in a man, it is usually painful. For many men, Peyronie's disease also causes stress, anxiety and relationship problems. If you think you may have Peyronie's disease, contact a urologist today.