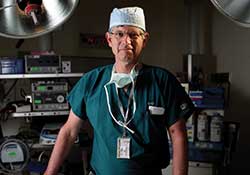 Dr. Ian M. Thompson Jr. is director of the Cancer Therapy & Research Center at The University of Texas Health Science Center in San Antonio, a National Cancer Institute-designated Cancer Center, and is the former chair of urology. He is the chair of the Genitourinary (GU) Committee of SWOG (a national clinical trials network), a trustee of the American Board of Urology, and chair of the Early Detection Research Network of the National Cancer Institute. In 2012, he received the AUA Hugh Hampton Young Award for outstanding contributions to the diagnosis, control and prevention of prostate cancer.

Q: There has been a lot of talk about the PSA test lately. What exactly is it?

A: PSA, or prostate-specific antigen, was discovered in the early 1970s. It is a protein found in semen and at low levels in the bloodstream of healthy men. In the early 1980s, researchers discovered that high levels of PSA were found in the blood of men with advanced prostate cancer. With this information, the medical community recognized that testing PSA levels in the blood provided an option for early detection of prostate cancer. Before the PSA test, the only way we could test for prostate cancer was the digital rectal exam. This is a physical test where the urologist feels the prostate for abnormalities. Before the PSA test, most men were not diagnosed with prostate cancer until the prostate felt abnormal and it had already spread beyond the prostate. This means that most men were not diagnosed until the cancer had reached an advanced stage.

Q: What is the USPSTF and, in general, what is the purpose of its recommendations?

A: The USPSTF, or U.S. Preventive Services Task Force, makes recommendations about the value of various medical preventive tests. This can be helpful to primary care providers who have a huge number of health issues that they address and thousands of options for which tests to offer their patients. Clearly, they can't offer all of those tests. So many turn to the USPSTF to help them decide which tests are most important.

Q: What recommendation did the USPSTF make about the PSA test, and why are members of the medical community disturbed by this recommendation?

A: The USPSTF makes their recommendations based on results from clinical trials. For the PSA test, they looked at two clinical trials, one in Europe and one in the United States, both during the 1990s. After reviewing the results of these trials, the USPSTF determined that "the benefits [of the PSA test] do not outweigh the harms." In other words, some men's lives were saved.  However, the USPSTF does not believe that enough men's lives were saved to justify giving the test to every man.

The important thing for us to note is that the PSA test itself is not harmful. It is a simple blood test. The "harm" that the USPSTF's recommendation is referring to is unnecessary treatment of men that have the type of slow-growing, non-aggressive prostate cancer that is not likely to kill you. The PSA test itself cannot differentiate between these men and the men that have aggressive prostate cancer and are in need of treatment. So the USPSTF has operated under the assumption that each man who gets the PSA test and comes back with high results will be treated as if he has aggressive prostate cancer. The problem is that this is simply not true. Over the past few decades we have learned a great deal about diagnosing prostate cancer. The clinical trials reviewed by the USPSTF were not based on today's procedures and standards. Today we can better predict who ought to have a biopsy after the PSA test and who should not. We are also better able to determine who should have treatment.

Q: How would you counsel a man who is unsure about getting the test?

A: Before having your first PSA test, it is very important to have a conversation about the pros and cons with your physician, and discuss whether the test is right for you. It’s a short conversation as well as a long one. It’s a common disease in a man as he grows older. The average man has about a 1 in 30 risk of dying from prostate cancer. Is that a great enough risk for you to want to take the test to reduce the risk? With the PSA test, we can significantly reduce that risk. Of course it is the responsibility of your physician to use the test intelligently and to clearly explain the results as well as what your options are.

Q: If a man gets the PSA test and his PSA level is high, what should the next step be?

A: One thing I always recommend is that if the test is high you should repeat it—the second time may come back normal. Never make a decision based on just one test. After that, the choice to do a biopsy is based on the PSA level as well as other factors. Family history of the disease, personal health history, life expectancy and race are factored into the decision. (African-American men are twice as likely to develop prostate cancer, and are also more likely to have the aggressive kind.) Then there are a variety of treatment options, including “active surveillance,” or closely monitoring PSA levels for increases over time before continuing with treatment, which may be appropriate for slow-growing prostate cancer.

Q: What is the most important thing our readers should take away from this article?

A: You have the right to decide what’s best for you—be sure to make an informed decision. Have a discussion with your physician. Get all the information you can, and talk about it every step of the way.