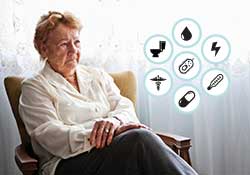 Urinary tract infections (UTIs) account for more than 8.1 million visits to the doctor each year. About 40 percent of women and 12 percent of men will feel the symptoms of at least one UTI during their lifetime. About one in five young women who have a UTI will have another one. Men are less likely to get a UTI in the first place. But if they get one, they are likely to have another because the bacteria tends to hide inside the prostate.

Nora Yoshimura knows all too well how to spot the signs of a UTI. The 83-year-old grandmother has been dealing with UTIs for 55 years. “I know from how often I urinate and the burning feeling when I urinate,” she says. After struggling with UTIs for many years, she has been able to get them under control. She works closely with her urologist to start treatment at the first sign of infection.

“I still get them, especially when I travel,” Nora says. “The worst thing about a UTI is having to keep running to the bathroom. It’s embarrassing. I’ve been in some tough situations, such as being on an airplane and being told I couldn’t leave my seat to go to the bathroom.”

Nora’s urologist, Dr. Anthony J. Schaeffer, explained it wasn’t her fault that she keeps getting UTIs. “I’ve tried everything to prevent them, and nothing works,” she says. Dr. Schaeffer, American Urological Association member and Chair of the Department of Urology at Northwestern University Feinberg School of Medicine, says, “Most older women have bacteria in their urine which do not cause symptoms and should not be treated. But Nora has UTIs with symptoms.”

Normal urine has no bacteria. But if bacteria get into the urethra (the tube that empties urine from the bladder to the outside) and travel into the bladder, a UTI can occur. The infection most often starts in the bladder, but can spread to the kidneys.

UTIs can cause pain in your abdomen and pelvic area. It can make you feel like you need to urinate more often. You may even try to urinate but only produce a few drops. And you may feel some burning as your urine comes out. At times, you may lose control of your urine. Kidney infections often cause fever and back pain. These infections need to be treated quickly. A kidney infection can quickly spread into the bloodstream and be life-threatening.

Some people, like Nora, are more likely to get UTIs. Sexual intercourse and low levels of estrogen in the vagina raise the frequency of the infections. Using condoms with sperm-killing foam is also known to be linked to an increase in UTIs in women. Diseases such as diabetes also put people at higher risk. This is because they lower the body’s immune system function and make it harder to fight off infections.

If you think you may have a UTI, you should call your doctor. Your first UTI should be assessed in your doctor's office. In most cases, the doctor may use a urine test (called a culture) to look for signs of infection. These signs are bacteria or white blood cells in the urine. A urine culture is not needed for women with occasional uncomplicated UTIs, but Dr. Schaeffer says it is important for those who have recurring uncomplicated UTIs and complicated UTIs. If you ever see blood in your urine, you should call your doctor right away. Blood in the urine may be caused by a UTI, but it may also be from a different problem in the urinary tract.

“When infections start to occur frequently, you need to see a doctor for a more thorough evaluation, including urine cultures,” Dr. Schaeffer advises. “Start with your primary care doctor, who may refer you to a urologist. If your urine culture shows you don’t have a UTI, you’ll need further testing to find out the cause of your symptoms.” In rare cases, a person with symptoms similar to a UTI, but with repeated negative cultures (meaning they don’t show a bacterial infection) may in fact have bladder cancer. A positive culture (which finds bacteria) confirms a woman has a UTI. The test also shows whether the bacteria will respond to treatment with antibiotics.

Treatment for an uncomplicated UTI is a short course of oral antibiotic without a urine culture to confirm you have an infection. This treatment is often just three days. Depending on the type of antibiotic used, you may take a single dose a day or up to four doses a day. A few doses may get rid of the pain or urge to urinate often. But you should still finish the full course of medication prescribed for you even if you feel better. Unless UTIs are fully treated, they can often return. It’s important to follow the doctor’s instructions for taking the medication exactly. This will help you avoid side effects and make sure the bacteria don’t become resistant, Dr. Schaeffer explains. If your symptoms don’t disappear quickly, your doctor may need to prescribe a different antibiotic. If you have a complicated UTI, you may need IV antibiotics.

If you get frequent UTIs, your doctor may suggest a six-month course of low-dose, nightly antibiotics. This will reduce UTIs by 95 percent. But when a person stops taking the drugs, UTIs usually come back. Some doctors may then suggest “self-start” treatment. The doctor gives you a urine culture device and a course of antibiotics. If you think you have an infection coming on, you do a urine culture at home and start taking the antibiotics. The culture is returned to the doctor’s office to see if you have an infection and are using the right drug. This is how Nora handles her UTIs. “When I feel one coming on, I do a urine culture, and I take antibiotics prescribed by the doctor’s office. This way, I can get it right away, before it gets too bad.”

Dr. Schaeffer says patients often ask if cranberry juice will help prevent or reduce UTIs. They are often disappointed to learn research studies have not proven this to be true.

“For women who are genetically predisposed to get frequent UTIs, the recurrent infections may be a lifetime issue,” says Dr. Schaeffer. “But careful management can keep the incidence and cost to a minimum.”

Symptoms of a UTI

When Should I See A Health Care Provider?