VUR: Against the Flow 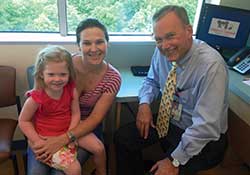 Vesicoureteral reflux is often diagnosed after a child has had more than one urinary tract infection; however, it generally does not cause pain or pose problems for children when they urinate. Children with VUR may develop urinary tract or kidney infections and may have a higher chance for kidney damage.

Addison Parks was just 15 months old when she had her first urinary tract infection (UTI). Her doctor prescribed antibiotics, and she recovered; but then, just two months later, she developed a second UTI. That is when her doctor sent her to a pediatric urologist, a doctor who specializes in children’s diseases of the urinary tract.

Most children with VUR are diagnosed when they are two or three years of age. About three-fourths of children treated for VUR are girls. Managing the condition usually involves doctor visits and may involve medication or medical procedures. However, Addison’s mother, Sara, says they have learned to adjust to life with VUR. “Addison has had no side effects—no one would ever know she had this condition unless we told them,” said Sara, who also is a nurse.

VUR can be passed down from parent to child. If a mother has been diagnosed with VUR, as many as half her children may also have the condition. Signs of VUR can be detected before birth using an ultrasound. But VUR cannot be diagnosed for certain until the baby is born and has a bladder x-ray. Most children, as in Addison’s case, are diagnosed after they have more than one urinary tract infection.

VUR affects about one percent of children, and many grow out of it around age five or six. This is because the connection between the bladder and ureter develops and grows as the child grows. During the X-ray procedure used to diagnose VUR, the child’s bladder is filled with a harmless fluid that contains an X-ray dye. When the child’s bladder is full, they are asked to empty their bladder. X-rays of the bladder are taken to see if the dye goes backward toward one or both kidneys. Children may be awake for this simple procedure, or they may be sedated, as was the case with Addison. “Sedation was a godsend for us,” said Sara. “She wasn’t scared.”

Many children suffer no pain or kidney damage from VUR. But for those who develop repeated urinary tract infections and kidney scarring, the damage can be serious, says Addison’s doctor. Craig A. Peters, MD, is the Chief of the Division of Surgical Innovation at the Sheikh Zayed Institute for Pediatric Surgical Innovation at Children’s National Medical Center in Washington, DC. “Our challenge is to try to figure out who to worry about, and tailor the management of the disease to the child’s risk,” he says.

The goal of medical treatment is to prevent urinary tract infections and kidney damage until the child grows enough for VUR to disappear.

Many children with VUR do not urinate often or empty their bladders completely. These toilet habits leave children at a higher risk for getting a kidney infection. “This is a very common problem,” Dr. Peters says. “We see kids who are ‘over-toilet-trained.’ These are often busy little girls who don’t want to ‘waste their time’ going to the bathroom, and end up holding it in.”

Children with VUR often go to the doctor for regular checkups to look for signs of infection. They may be prescribed low-dose antibiotics to keep from getting an infection, and they may need an occasional X-ray of the bladder and kidneys to see whether the VUR is going away.

Not all children with a urinary tract infection need to have a bladder X-ray, according to Dr. Peters. “If a young child with an infection has an ultrasound that doesn’t show any signs of VUR (such as one kidney that is smaller than the other), and if they don’t have another infection, it’s reasonable to not treat,” Dr. Peters observes. “If they have a second urinary tract infection, I would strongly consider a bladder X-ray to check for VUR.”

A study published in May 2014 in the New England Journal of Medicine looked at more than 600 children with VUR who had a urinary tract infection. The study included children two months to six years of age, and lasted for two years. Those who were given daily, low-dose antibiotics were half as likely to have more infections with a fever, compared with children who did not take the medicine.

The study points to the need to find which children with VUR are at the highest risk of urinary tract infection with fever and kidney injury, Dr. Peters notes. “The children we worry about most are those with VUR who have a high fever, vomiting, back pain and pain in the bladder,” he says.

Some parents don’t want their children to take antibiotics for long periods because they are worried about antibiotic resistance. Dr. Peters tells them this is more likely to develop in children who take higher doses of antibiotics for unnecessary reasons, such as a viral infection. However, if parents understand the risk of not taking the drugs and promise to monitor the child closely, this can be an acceptable alternative to long-term medication, Dr. Peters says.

“Parents have a choice of treating their kids with a full dose of antibiotics every time they get a urinary tract infection, or a low dose of preventive antibiotics. Kids who get an infection can get really sick. With each succeeding urinary tract infection, the chance of kidney scarring increases. We’d love not to use long-term antibiotics, but we don’t have a good alternative except for surgical repair.” Treating infections promptly decreases the risk of kidney scarring.

“If you treat each infection as it comes, that puts a big burden on the family to spot the infection. Young kids don’t have a sign on them saying, ‘I have a kidney infection.’ They look great until they suddenly look terrible,” explains Dr. Peters.

If a child takes long-term antibiotics, works on their bladder training, and still gets infections, the doctor may recommend surgery. Addison’s family has decided not to go through surgery for now. She is taking daily, low-dose antibiotics, and has periodic bladder X-rays to check on her condition. “Every situation is a little different,” says Sara. “As long as Addison’s kidneys aren’t being damaged or hurt, and she’s maintaining the status quo, we’ll keep re-evaluating every six months.”