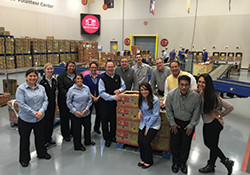 Urology has played a very important role in Sam Covelli's life. This was his way to say thanks.

He joined the Urology Care Foundation Board of Directors in 2014. He saw it as a perfect chance to give back to the community of urology. This includes caregivers, patients and their families.

"I had a prostate issue, and when I was being treated, I had some of the best urologists in the world. I got to know some of the most compassionate urologists," he said. "It gave me a better understanding of how important urologic health is to your overall health."

Mr. Covelli said he was always treated like a person first, not just a patient. Having such a positive experience in urology led him to believe in the work of the Foundation.

"It was a relief to know I had such a great urology team beside me," he said. "I was really worried at the beginning of it all, but I'm fine now. It was just a scare. The team took care of everything before it got serious."
Richard Memo, MD, is chair of the Foundation's Board of Directors. He was a urologist for Mr. Covelli's father. Mr. Covelli is thankful for the way Dr. Memo and other urologists like him treat their patients. These experiences were key to Mr. Covelli's decision to join the Board.

"I don't join a Board for the sake of joining a Board. Their goals and mission are important to me. Our goal with the Foundation is to help people get better and live healthy lives. We want to find cures. We want people to know they are in good hands when they go to urologists," he said.

Making a Difference in Other Ways

Mr. Covelli is no stranger to giving back. He is the owner and operator of Covelli Enterprises, one of the largest restaurant franchises in the United States. Covelli Enterprises donates millions of dollars each year to support a diverse range of charities and causes.