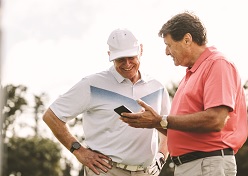 “Up to 80 percent of cases are found when someone has an MRI, CT or ultrasound for some other reason, and the doctor sees a spot on the kidney,” Dr. Kowalczyk said. In many cases, these tumors are found when they are small, and can be surgically removed.

In the early stages of kidney cancer, tumors often do not cause any symptoms. A person whose kidney cancer is more advanced may have:

“While many cases of kidney cancer don’t cause symptoms, if you see blood in your urine, don’t ignore it—even if it occurs only one time. It could be a sign of kidney or bladder cancer,” Dr. Kowalczyk said.

Routine screening for kidney cancer is not recommended, except for people who have had multiple family members with kidney tumors, he said.

For small, early-stage tumors, the doctor may suggest a strategy called active surveillance, or “watch and wait.” The doctor will recommend routine scans – often every 3 to 6 months – to see if the tumor grows.

If the tumor starts to grow, but is still less than 4 centimeters (about 1.5 inches), the first treatment is surgery called a partial nephrectomy. This procedure removes the tumor, while keeping the rest of the kidney intact. “We are usually able to preserve kidney function,” Dr. Kowalczyk said. “Kidney cancer cures rates for these small tumors ranges between 90-95 percent.” In most cases, no further treatment is needed, aside from continued routine screenings to make sure the cancer has not returned.

Most procedures are done through laparoscopy, in which tube-like instruments are inserted into the abdomen through small “key-hole” cuts to remove the tumor. Sometimes, the surgeon may use robotic instruments to perform the operation. “Patients usually go home in a day or two,” Dr. Kowalczyk said.

If the tumor is large or in a place where it cannot be easily removed, the surgeon may need to remove the entire kidney. This is called a radical nephrectomy. Most of these procedures are done through laparoscopy. In some cases, the kidney is removed through “open” surgery, in which the surgeon makes a large (10-inch) incision in the abdomen to remove the tumor. “Even if the entire kidney is removed laparoscopically, the patient usually can go home the next day,” Dr. Kowalczyk noted.

Another treatment for kidney cancer is called ablation. It is used for small tumors less than 4 centimeters. Ablation destroys the tumor, either by freezing or heating tumors to kill cells. This may be used for people who can’t have surgery because of other medical issues. “People who are treated with ablation are more likely than those treated with surgery to have a recurrence,” Dr. Kowalczyk said.

For patients who have been treated with surgery who have a recurrence of kidney cancer in a limited area, more surgery may be an option.

If the cancer has spread to more than one area, the next step is treatment that works throughout the body. While chemotherapy has not been shown to be effective in treating kidney cancer, doctors have had success using immunotherapy, Dr. Kowalczyk said. This treatment uses the body’s own immune system to fight the cancer.

The Food and Drug Administration has approved several combinations of a type of immunotherapy called checkpoint inhibitors to treated advanced kidney cancer. “Tumors are able to protect themselves from the immune system. These drugs take that ability away from the tumor, so it can’t hide. They allow the immune system to fight the cancer,” he said. “With these new drugs, we see many patients who are able to live quite a long time with stable disease.” Researchers are continuing to study combinations of immunotherapy drugs to find out which are most effective in fighting kidney cancer.

Side effects of immunotherapy can include skin reactions, flu-like symptoms, diarrhea and weight changes.

Another treatment used for recurrent kidney cancer is called targeted therapy. This treatment targets the cancer’s specific genes, proteins or the tissue that contributes to cancer growth and survival. It blocks the growth and spread of cancer cells, while limiting damage to healthy cells. One type of targeted therapy, called anti-angiogenesis therapy, stops tumors from making new blood vessels. This “starves” the tumor and blocks it from growing and spreading.

Reducing the Risk of Kidney Cancer

To lower your risk of kidney cancer, you should take steps also recommended to lower the risk of many other cancers and heart disease. These include not smoking, keeping your weight within a healthy range and eating a balanced diet with plenty of fruits and vegetables. “If you have high blood pressure or diabetes, work with your doctor to keep it under control, because these conditions increase the risk of kidney disease,” Dr. Kowalczyk said.

Learn more by checking out our new Combination Immunotherapy for Kidney Cancer fact sheet, podcast and poster by visiting UrologyHealth.org/KCImmunotherapy