What is a Renal Mass and What is a Localized Renal Tumor?

Most diagnosed kidney growths are small and localized masses. Localized means that the tumor has not spread out from where it first started. Around 40% of kidney cancers are localized renal masses. Masses may be solid or cystic (having fluid). Most cystic masses are benign.

Where are the Kidneys and What are they for?

The kidneys are two bean-shaped organs near the middle of the back. There is one kidney below the rib cage on each side of the spine. Each kidney is about the size of a fist.Our kidneys' main job is to filter the blood. The kidneys remove water and waste from our blood in the form of urine. Urine then leaves our body by way of the bladder and the urethra. As a filter, the kidneys:

The kidneys also make hormones that help to:

What do we Know about Kidney Cancers?

Kidney and renal pelvis cancers are the 12th leading cause of cancer death in the U.S. Kidney cancer is 9th on the list of the 10 most common types of cancer. Almost all of the kidney cancers in the U.S. are renal cell carcinomas (RCC). These cancers form in the lining of the small tubes in the kidney.

There will be more than 73,000 new cases of kidney cancer in the U.S. in 2019. Of those cases, nearly 15,000 people will likely die from the disease. The earlier the cancer is diagnosed-the better the chances of survival. The five-year survival rate for all kidney cancers is about 74%. If the cancer spreads over the body, then this rate falls to about 12%. The five-year survival for localized kidney and renal pelvis cancer is 92.5%.

Renal tumors are grouped by where they start growing and by their structure. The main classes of tumors are:

Over half of renal tumors are found by chance and may have no symptoms. They often are found when your doctor is doing a test for other health problems. Tumors found in this way are more likely localized to the kidney. These types of tumors have good outcomes. Most renal masses have no symptoms in the early stages. But, if there are symptoms, they will most likely be:

Doctors do not know what causes kidney cancer. But, they do know there are certain risk factors that increase your chance of getting kidney cancer. They are:

How can you lessen the risk for kidney cancer?

Some actions may help to reduce the risk of kidney tumors:

There are no routine lab tests to find kidney cancer. Often tumors are found during genetic screening or when you see a doctor about another problem. If your doctor thinks you have a kidney tumor, he/she might send you to see a urologist. A urologist is a doctor who specializes in the genitourinary system. When you see your urologist, they will ask you questions about your symptoms and health. They will give you a physical exam, order lab tests and may take pictures of your body.

Some common tests and procedures for renal tumors

Your doctor may use many tests and procedures to make a diagnosis. Here are some that you might expect:

Renal mass biopsy may be done to find out what type of tumor you may have. A biopsy is when cells or tiny parts of an organ are removed and studied. A pathologist views the sample under a microscope. The biopsy will show if the tumor started in another part of your body or if it started in the kidney. A biopsy may also tell if there is an infection, such as an abscess. It can help find cancer and make better treatment choices.

Grade and stage are two important ways to measure and describe how cancer develops. A tumor grade tells how aggressive the cancer cells are. A tumor stage tells how much the cancer has spread.

Your healthcare provider may use a special grading system for your kidney disease. This grading system uses numbers or letters that give details about the tumor. The grades 1 through 4 show increasing severity with "1" being the lowest level and "4" the highest. A higher grade and more advanced stage usually mean larger tumor size and more aggressive tumors. Your doctor can only grade your tumor by looking at it under a microscope.

Stage I and II tumors include cancers of any size that are only inside the kidney.
Stage III tumors are either locally invasive (T3) or involve lymph nodes (N1). This is cancer that is only found within the kidney organ.
Stage IV tumors have spread beyond the kidney into organs nearby (T4) or distant metastases (M1).

T describes the primary tumor. It tells us the size of the tumor and whether it has grown into nearby areas.

Active surveillance is the least invasive treatment for small, localized renal masses. Your healthcare provider will help you decide if this is a good choice for you.

For some patients surgery is never needed. Your provider will evaluate your preferences, tumor factors and likely outcomes to see if AS is a good treatment option for you. Tumor factors will include size, stage and growth progression.

The goals of AS are to stop the spread of cancer, maintain kidney function and avoid potential side effects of treatment. There are three tracks for surveillance treatment:

Nephrectomy is a surgical procedure to remove all or part of the kidney. There are two types of nephrectomy for a diseased kidney  partial and radical. In a partial nephrectomy, the doctor removes the tumor or diseased part of your kidney and leaves the healthy part. Partial nephrectomy is recommended for localized renal masses and can also be done for larger tumors. When the tumor is removed, a biopsy can be done to tell whether it is cancerous or shows sign of advancing.

If your tumor is small (a T1a mass less than 4 cm in size), your surgeon may consider ablation. Ablation destroys the tumor with extreme heat or cold.

Before ablation is done, your doctor will do a biopsy. This will help with treatment decisions. Ablation can be done by laparoscopy or by a percutaneous approach (with a needle).

It is well suited for small renal masses  those less than 3 cm. It also helps to preserve renal function and spare the kidney. The percutaneous method is better for some small renal masses because the procedure time is shorter, recovery is quicker and there is less need for pain medication.

Patients with a localized renal mass should have a urologist involved with their care. A urologist will help coordinate evaluation, counseling and management. The urologist should be part of a multidisciplinary team so that all aspects of your care are considered. Your care team might include a radiologist, urologist, neurologist, a pathologist and a medical oncologist.

Counseling would include explanations of the risks and benefits of the treatment plan and possible clinical outcomes. The best treatment plan includes your own preferences, physical condition, other illnesses, outlook and lifestyle. Decisions should include plans for the short and long term.

Genetic counseling should be offered for tumors with a familial history. There are several renal masses that are found to run in families. Patients diagnosed at the age of 46 years or younger should strongly consider genetic counseling. Ask your healthcare provider if you would benefit from genetic counseling.

Whatever treatment you choose, you need to stay in touch with your healthcare provider. Make sure you return for ALL follow-up appointments as directed. These checkups are important to watch for re-growth of tumors. After initial treatment, your doctor may perform many of the same tests used to diagnose your cancer.

Maintaining a healthy lifestyle is important. If you smoke now, quit smoking. Limit your alcohol intake.  Eat a balanced diet, with lots of green leafy vegetables and occasional fatty fish. Exercise and try to keep your weight within recommended limits.

Here are some questions you might ask your healthcare provider:

Kidney Cancer: What You Need to Know Fact Sheet 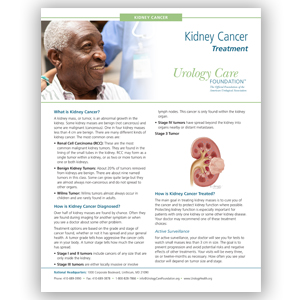