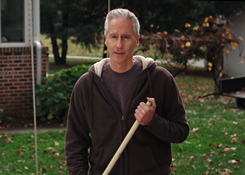 Peyronie's Disease occurs when scar tissue, called plaque, forms under the skin of the penis. Most often, this plaque builds up, leading to curved erections, which can be painful. In some cases of this disease it is difficult or even impossible to have sex.

Many times, men who have symptoms choose not to seek help. They might be embarrassed or do not understand what is happening. Seek help right away if you think you might have Peyronie's Disease. The sooner you receive treatment, the better your outcome.

The Urology Care Foundation is getting the word out about Peyronie's Disease. Talking to your doctor (as soon as you can) is of great value if you think you have it. As part of this effort to inform you, we've released 3 free educational resources:

• It impacts about 6% of men between ages 40 and 70.
• The number of cases may be higher than known, as many men may be too embarrassed to seek help.
• The plaque that builds is not the same plaque that can build in a person's arteries.
• Signs of the disease may include a curve in the penis, hard lumps on the side of the penis, soft or painful erections and having sex that hurts.
• It is not a disease you can catch from someone else and it is not caused by any known disease that can be passed to others.

You can also learn more by reading our "What is Peyronie's Disease?" web page.