Circumcision is cutting away the skin ("foreskin") that covers the tip of a baby's penis. In recent years, newborn circumcision has been a hot topic of debate.

Your choice of whether to circumcise your son may be a question of religion or custom (circumcision is part of Jewish and Muslim custom). In other cases, parents may simply want their son to look like his father or other male family members.

In the U.S., the American Urological Association (AUA) and the American Academy of Pediatrics (AAP) each have a policy statement on circumcision. Both groups recommend that it be offered as a choice to parents. The AUA believes that circumcising newborns has benefits and risks.

The most recent policy statement of the AAP in 2012 indicated that, based on newer evidence, the benefits of a circumcision outweigh the risks of the procedure. You should talk with your child's doctor about the health risks and benefits, and decide what will work for your family.

Studies have shown that circumcision lowers the risk of getting HIV. This is because the foreskin is not like the skin on other parts of your body. The foreskin has a type of cell called Langerhans cells, which are more likely to attach to HIV cells. Based on these findings, in 2007 the World Health Organization endorsed circumcision as a way to help stop the spread of HIV. Studies have also shown that circumcision reduces the spread of other diseases that are passed through sex.

Properly performed circumcision on newborns also prevents phimosis, paraphimosis and balanoposthitis – all problems with the foreskin.

The risk of bad side effects from circumcision is low. The most common side effect is bleeding or infection. When circumcision is not done the right way, the urethra (the tube that carries urine out of the body) or penis may be hurt. In rare cases, death has even occurred.

Some problems linked to circumcision that may not be noticed until later are buried penis, meatal stenosis (narrow opening at the end of the penis), skin bridges, chordee (curved penis), and the penis not looking right. Some of these problems may need to be fixed with surgery.

Circumcision of a newborn is mostly a quick, safe procedure when done by a skilled doctor. To lessen pain for newborns, a pain killer may be used. There is some evidence that babies may be less likely to feel pain 7 to 10 days after birth. This is because newborns have a high level of endorphins (substances made by the body that reduce pain).

A special clamp is attached to the penis and the foreskin is cut away.

After circumcision, caring for the penis is simple but important. Wash the area gently with warm water. Pat dry and put on a new bandage with antibiotic ointment each time you change the diaper. It should take about a week to heal. It's normal for there to be a little swelling, redness and maybe blood at first. If these problems last several days or get worse, have your baby seen by his doctor. Also talk to your baby's doctor if he gets a fever or doesn't have a wet diaper within 12 hours of circumcision. Almost all side effects are easily treated.

If you decide not to have your baby circumcised, you should wash his penis with soap and water with each bath. Also, be sure to teach him good hygiene and how to care for his penis as he grows older. Treat the foreskin gently and make sure not to pull it back with great force. Once it starts to be able to pull back (often around age 5), it is important to clean under the foreskin with soap and water often. He should see a doctor if there is any swelling or pain, or if the foreskin is itchy. 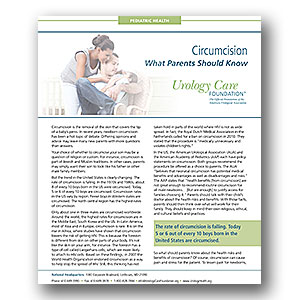 Other UrologyHealth.org Articles You May Want to Read

“What Parents Should Know: Circumcision”